The Greater Than Aids Coalition of Savannah was having pizza somewhere outside of Atlanta. It was a stop on the way to the Capitol where we would ask Georgia representatives why HIV funding stopped at Atlanta and did not trickle down to us. Savannah has the second highest HIV infection rate in the state.

“My partner died in 1981,” an older gentleman said to the group as he peered down at the menu. “He was on AZT. When the new antiretrovirals came out, it was a godsend.”

The pizzeria had those red and white checked tablecloths you associate with cheap Italian restaurants. “God had nothing to do with it,” I said.

In an instant, all eyes were on me. I continued: “We did that. If there was a god, he could have spared himself the trouble of sending us antiretrovirals and just not allowed HIV to happen in the first place.”

Atheism is a difficult subject for people who are sick. We find god during illness and disease, struggle and tribulation, the way we are supposed to. Many would tell me over the course of the night and the next day that their faith is what “pulled them through.” I have heard it a hundred times: “I knew god had a plan for me, and he would get me through this.”

When I hear statements like that, I’m always tempted to ask why their benign god would allow them to get HIV in the first place? Why did he allow their partners and friends, who were not so lucky, to simply die? Why will our lives, significantly improved from the worst days of the epidemic, still be filled with suffering and blood draws, medical bills and worrying numbers?

The gentleman across from me said, “So I take it you don’t believe in god.”

“So what do you believe?” This is a common question, and the answer is, “Very little.”  Different atheists believe in different things. Some take an ethical stance based on implicit good — a benign outlook on the natural world. Others believe in utilitarianism, or “greatest good for the greatest number.” Others, like me, believe pleasure is good and suffering is bad — the hedonists. The one thing all atheistic approaches to life have in common is that they all place enormous importance on one’s own ability to determine what is good and bad, right and wrong, moral and immoral. They let you be your own god. You call the shots.

Atheism lacks any centralization, which may be its best feature. There is no governing body of people who define what doctrine will be officialized, what must be read and done, in order to be an atheist. There’s no Vatican, no Pope, no holy book.

I am an existential hedonist in the truest sense. I don’t think life has inherent meaning, and I think ethics are subjective social constructs, byproducts of evolutionary data. With no god and no meaning, pleasure becomes the highest moral pursuit. I think suffering is best avoided, and pleasure is good for you. I don’t believe in an afterlife. When you’re dead, you’re dead.

I could be called an antifoundationalist like Derrida and Richard Rorty and other thinkers with a chipper acceptance of meaninglessness. Science is generally regarded as the stuff of atheism, and many atheists draw their strength from scientists and scientific argument and base their nonreligious assertions on mathematical data. But I’m not a scientist, so I can’t base my atheism in numbers and figures I don’t understand — and I never have. And anyway, science is useless in an argument with a believer. What I’ve come to witness is that religious minds don’t care about science when it’s presented to them. Theirs is not a faith in facts and reasoning. My atheistic argument holds up better under religious critique because we speak the same language — my reasons are moral, not scientific. I was raised in religion, and I know that most arguments in faith come down to moral truths. Concepts are validated not be being real, but by being “right.”

Here’s why I’m morally opposed to belief. Christians would have me believe that an all-powerful, all-knowing, loving being created mankind. This being, being omniscient, was fully aware that we would commit sin, and simultaneously chose to punish us for doing so. And if Genesis is to be believed, he opted for more than mild punishment, more than a slap on the wrist. He damned us for all eternity because someone (well, two people) ate an apple.

He could have created us without the impulse to sin or chose not to taunt Eve with the “don’t touch this” tree in Eden, or simply chosen to forgive our built-in flaw, one he made us with, so that we could go on living painless, idyllic lives.

Regardless of our sinful natures (natures he inevitably foresaw and for which he is invariably and unavoidably responsible, for who else made us?), he could have chosen to make our lives free from suffering and misery forever. Foreseeing the Holocaust, the AIDs epidemic, and all the rampant disease and starvation and war that plagues our species, he could have done away with all the awful things in our future, spared us this horrible trajectory, and made our lives enjoyable. If he is all-knowing and all-powerful — omniscient and omnipotent — he chose to create us with the unavoidable intention of watching us suffer. He made us so that he could watch us die miserable deaths, kill each other off, and toil on the earth — for what? Kicks? Entertainment?

Or worse, for praise?

To me, god is more than a fallacious theory. If he is real, then he is an evil, sadistic being, fully responsible for our suffering and pain. If god exists — and I do not believe for a moment that does — he should be destroyed immediately. That’s why I am anti-god, anti-belief, and morally opposed to thanking a jealous, perverse, childish deity for this life of pain. 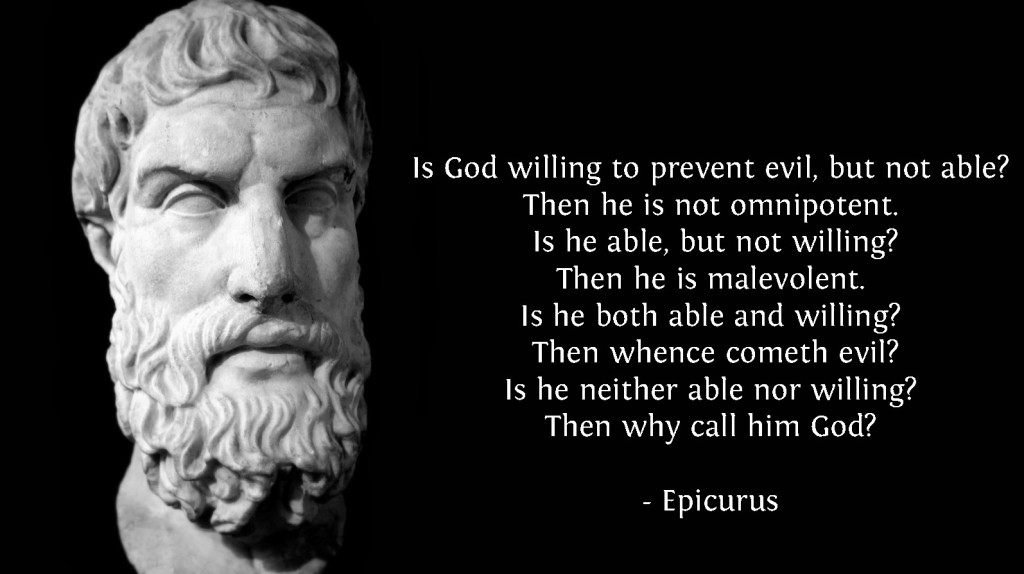 As reasoning humans with thousands of years of religious history behind us, we instinctively feel that there must be a reason, some kind of explanation, for human suffering. We want to pin blame on someone. Our species doesn’t easily accept the idea of meaningless agony. We want to believe we’re special and that the universe favors us, so we have created religions and belief systems that elevate our suffering to something holy. It must be god testing us, we think, or punishment for wrongdoing.

In conversations like this, I’ve been told that my beliefs — or lake thereof — are based on fear. I think the opposite is true. I think people are comforted by ideas like purpose and meaning. Take those concepts away and they get very afraid and very defensive. Take away their religion — or threaten it — and religious people freak out, and often jump at the opportunity to pass laws and mandates prohibiting their beliefs to go under attack.

I once looked at the stars and saw a deified cosmology, a world of god that placed me at its center. Now I see that we, mankind, beat the natural world into subservience. We cut down trees and killed off the competition. When I look at the stars now, I see something far more wondrous — enormous balls of gas burning so far away that their light has taken longer than their lifetimes to reach me.

By the end of dinner, my friends at least understood my reasoning, even if they didn’t agree with my views. They shifted uncomfortably in their seats. I was the atheist at the table.