Mad Max: Fury Road is a loud, aggressive, nonstop joyride of guns and gears and explosions. I loved every minute of it.

I thought those terrible Fast and the Furious movies had claimed the title of the most macho franchise ever, but Fury Road reminds us of who took on Toecutter and saved the Feral Kid. And while George Miller’s latest addition to the franchise keeps with Max’s ruthless dystopian fury, it stands above the rest — thanks to a woman.

Some diehard straight guys have complained about the film, claiming it’s a cleverly-disguised feminist propaganda piece. Fuck yeah, it is.

Mad Max tends to get involved in other people’s conflicts, and this movie keeps with that tradition. This time, his mission is to help Furiosa, a one-armed badass warrior played with uncompromising toughness by Charlize Theron, save a group of young women from systematic rape by a psycho overlord named Immortan Joe (Hugh Keays-Byrne — welcome back). When he Immortan Joe storms their prison chamber — now empty — a message has been left on the wall: “Our babies will not be warlords.”

Furiosa takes over the movie, and we let her. Tom Hardy’s crazier, gruffish, more taciturn Max is a dashing sidekick to her crusade. The dom-sub dynamic between the two of them gets literal — at one point he’s leashed and muzzled and she’s tugging the chain. The whole movie is one giant chase scene with tense moments of stillness and sweeping vistas to break it up. 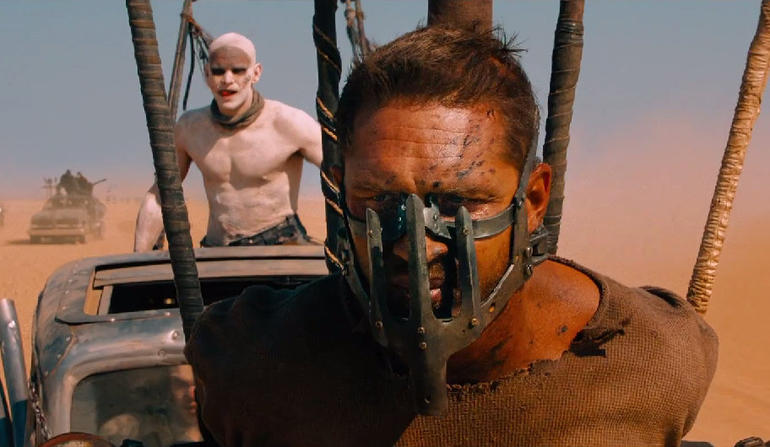 Fucking with gender stereotypes and omitting a sex scene entirely (or rape scene, which tend to happen in the world of Mad Max) makes Fury Road a bold and surprisingly queer power anthem for our times. We get the explosions and steampunk camp we need with the social commentary we need more.